Description: April 20, 2010 — See what happens when "The Man" takes money from a hard-working little girl and and gives it to her lazy competitor. What do you think? Do those who work harder, longer and smarter deserve to earn more or should everyone make the same amount regardless of effort? Tell us your opinion and watch the other Lemonade Stand Economics videos athttp://www.bit.ly/VirtuesOfCapitalism. To learn more: Read The Virtues of Capitalism by Scott Rae and Austin Hill
0 comments
Email ThisBlogThis!Share to TwitterShare to FacebookShare to Pinterest

At a men's retreat, someone brought out a point that will clarify a misconception about chastity in married life. This guy thought that just because he's married then he can do a lot of sexual stuff as long as he does not commit adultery and that there is no contraception involved.

First of all, my insights are general concepts and principles. For spiritual guidance, one needs a director - preferably ordained. What I'll state will not be enough but, it is a start.

Let's step back and establish some rules about judging immoral actions. There are 3 components: the action itself, the intention and the circumstances. The first 2 are self-explanatory. Some actions are evil by itself e.g. abortion or indifferent e.g. drinking water. Intention is why the action was done. And circumstances mean knowledge and freedom. Knowing that something is bad and still doing it is worse than being ignorant. And doing something deliberately makes it worse than being forced into it.

Let’s apply these to the case of watching porn to prepare for intercourse. The act by itself is immoral because, it dehumanizes women and supports that industry. The circumstances point to defective knowledge. He didn't know but can he be excused? No, it is clearly taught in the Catechism. Let’s assume that he is not addicted, so the act is deliberate. Finally, the intention - to start the marital act is good. But as you can see, determining culpability or sin or the gravity thereof is not that cut and dried.  (That is why the Lord ordered us not to condemn.  And that is why he forgave the Jews; because, they didn't know.)

But before going down to specific acts, we need to step back even farther to frame a moral life. There are 2 schools of thought: the navigation system model and the boundaries.

The first is like having a TomTom or Jiminy Cricket in your head saying, "Turn right or go ahead." So every step involves discerning God’s will. I think that is reserved for big decisions e.g. picking a career but not with what to do at bed.

The borders approach consist of having defined bounds and not crossing those lines. Anything within is fair. One can be spontaneous without analyzing every step. This is where the guy came from and he would have been right had he not missed one of the bounds.

What about foreplay? Definitely. In fact women need remote preparation. So, you can plant some thoughts in the morning then follow up with a phone call at noon. It is not sensitive to just jump her when you feel like it. She has to be ready too and it takes her more time to be in the mood.

How about playfulness and games? That’s foreplay too. It shows appreciation to your mate as a person instead of a bodily cavity.

How about props and positions? I'd think the rules to consider would be consent and dignity. Lubricants, scents, feathers, beads, ice-cubes, tapioca pudding and the entire Kama sutra is fair game. I have issues with SM and bondage - even if someone's wife likes it because, it degrades the other. Those issues may need to be referred to a mental professional.

And there are Church teachings about this – in general. See references below. I distinctly remember a passage stating that it is not enough for the man to be satisfied; he must ensure that the wife is also "fulfilled". At first, I felt a bit scandalized that clerics would talk about these but, with the new approach to sexuality, I even got to this point of writing details. I certainly hope I did not shock anyone. My goal was to make clear what is sinful so, God won’t be offended. And also, to state that while sex is not the end all and be all of married life, it does not have to be the missionary position all the time.

Mental Reservation of Sr. Carol Keehan. It's like a lie. 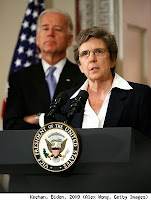 Sr. Carol Keehan declares, "We were in complete accord with our bishops and our church that abortion is a grave evil. There is no justification for abortion, and we would not ever have supported this bill if we thought it funded abortion." at a gathering of Catholics supporting Obama.

This comment is a gross misrepresentation of her support for the Health Care Bill or a very carefully worded message to state her decision to disobey the bishops on this matter.  Despite the bishops' admonition, she relied on her "thoughts" and deemed the bishops wrong.

Archbishop Joseph Naumann's published response to Sister Keehan's denial of abortion funding in the bill: "I find this statement by Sister Keehan either incredibly naïve or disingenuous. Either the bill permits previously prohibited government funding of abortion or not. This is not a technicality."

Excerpt:  "An early sign of health care reform's impact is Planned Parenthood's decision to open a new Oakland County clinic within the next 18 months, adding to 15 locations, including Detroit, Warren and Livonia. Unlike other Detroit area centers, the new location is likely to include abortion services.


[Planned Parenthood President Cecile] Richards and Lori Lamerand, executive director of Planned Parenthood of Mid and South Michigan, are ramping up for a boom in birth control and other reproductive services -- what Lamerand calls "an onslaught" of women poised to gain new access to reproductive health care."

We can speculate on the nun's motives with her false statement.  Is it to give the impression that Catholics can support Obama and the Democrats?  Probably.  But whatever it is, there was no confusion about the direction given by the bishops back then.  And she chose to ignore their guidance to the peril and death of many more unborn children.

2 Corinthians 11:14 "And no wonder, for Satan himself masquerades as an angel of light."