Saving the mother and her child from abortion 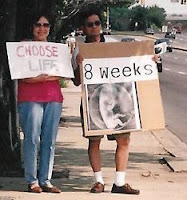 These are friends from a prayer group who tried to save the mothers and their children from abortion. On many Saturdays, we stood and prayed at the entrances of the abortion mill hoping to change the mother's choice. We know that the mother herself is a victim; probably abandoned by the boyfriend. We just want her to consider options before she makes matters worse. Women have been known to go nuts on the anniversary of their unborn child's demise. We showed a picture of a fetus at 8 weeks to inform the mother that it is a child and not a mass of undifferentiated cells. She's not popping a zit but killing her son or daughter. During those days:

Cars passed and honked in support; others yelled in disapproval.

A lady turned around, stopped at a convenience store & bought us bottled water. "It's the least I can do", she said.

A tough looking guy who looked at me menacingly as he stood close by. I glanced at my duffle bag when he did. He probably thought I had a weapon, so he left.

A fender bender happened in front of us and the drivers came out to get our names as witnesses.

An entire family came and yelled in our faces. When I shouted back, I got threatened with a lawsuit. Then, they went to the parking lot to copy our plates.

There was a kindly man who offered us $50 just to go home and make love to our spouses.

The scariest one was when a man gave us leaflets with the names of alleged abortionists. The leaflet had biblical quotes and a suggestion to have the list published in the newpaper. As soon as he left, I gathered the leaflets and instructed the group about not taking any action. That is one of the few times when I felt evil personified.