Marian devotion is not a relic but a relationship. 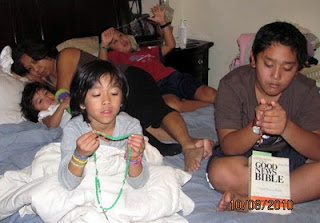 I wanted to instill in my family that October is the month of the Rosary. So, during night prayers, we prayed a decade on the first night, then 2 decades the next night until we ended up saying all 5. My kids’ ages are 3, 7, 8 and 10; so, I thought that would be too much for young children. But they were calm during the recitation. I didn’t have to be repressive or glare at mischief (well maybe once in awhile). In fact, when I had everyone lead decades, they were “calling it” i.e. “I call the 3rd. etc...”  I still don’t want them to develop an aversion for practices of piety so, I try to maintain a certain mix e.g. on Saturday when we go to Confession, we just say a decade. The same is with Sunday because we already went to Mass.

What surprised me was the calming effect of the Rosary brought. They did not get bored or annoyed. After October, we’ll still say it once or twice during the weekdays or on the weekends when we don’t go to Confession.  And when May comes along, we'll have a floral offering to her statue in the garden while singing Marian hymns.  Maybe I'll post a video by then.  We'll make it a family tradition and that way, Mother Mary becomes more and more part of our family.

Marian devotion is the most important devotion of the Christian community.  It is not only a lifeless tradition or festivity but part of the life of the Church;  just how many Marian apparitions have there been since her Assumption, how many miracles were done through her intercession starting from that party at Cana.  And for me, Mother Mary is not just an element of Catholic heritage.  She lives and continues to intercede for us.
2 comments
Email ThisBlogThis!Share to TwitterShare to FacebookShare to Pinterest

Video: Muslim desecrates altar at the cathedral of Florence

More from the followers of that religion (term used loosely in this case) of peace.  Anyone can feign mental illness to escape responsibility. What they do to others abroad – to the living altars in the person of Christians is not done under the pretense of insanity but is willful, intentional and spiteful. Cfr. links for persecution.org and persecution.com. I think we need to protect our brothers and sisters in Christ – specially in the Muslim countries where the government simply looks the other way. Please excuse the vehemence but I think the Lord himself gets riled up whenever the Temple – living or otherwise gets desecrated.

There's still some fight left in me.  Does anyone know the recruitment office of the Crusaders?
If video fails, go to http://divine-ripples.blogspot.com/2010/10/video-muslim-desecrates-altar-at.html

Telegiornale della Toscana has an exclusive video of a young Somali Muslim dancing on the mensa of the high altar of the Cathedral of Florence, to the sound of Michael Jackson's Bad.  Via: http://rorate-caeli.blogspot.com/
2 comments
Email ThisBlogThis!Share to TwitterShare to FacebookShare to Pinterest

Abortion rights argument: Personally opposed but tolerate it for the public 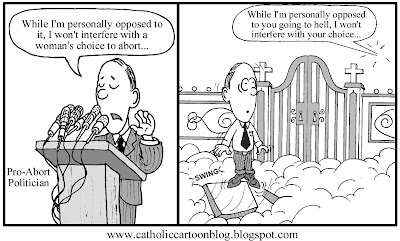 Video: Taking back the power

Power and liberty came from the Creator, not the government.

If video fails, go to http://divine-ripples.blogspot.com/2010/10/video-taking-back-power.html

Description:
The American people are fed up with an out-of-touch majority in Washington that refuses to listen to calls for an accountable, Constitutional government. House Republicans have heard you: we're putting the power back into the hands of We the People.