Video: Pope supports states rights to protect borders. (Is that racist too?)

If video fails, go to http://divine-ripples.blogspot.com/2010/10/video-pope-supports-states-rights-to.html

Description:  Benedict XVI sent a message for the World Day of the Immigrant and Refugees 2010 which will take place on January 16. The Pope noted that states have the right to "regulate migratory flows" and "defend their borders." But at the same time asked that governments welcome all people and ensure respect for human dignity.
1 comments
Email ThisBlogThis!Share to TwitterShare to FacebookShare to Pinterest

Video: The Wave Ad. How is that racist?

The problem of illegal immigration in the border states is different from that of the entire US;  it is focused on a specific ethnic group, the Mexicans - the people of the bordering country.  So, how is this ad being racist?  If it showed the Chinese, then I agree it would be racist because their percentage of illegal immigrants is less than 1%.  So, in my humble opinion, the ad is being factual.  Of course, the Democrats will always impugn albeit unfairly.  But judge for yourself.  If video fails, go to http://divine-ripples.blogspot.com/2010/10/video-wave-how-is-that-racist.html

Videos: Process of beatification has begun for Vietnamese Cardinal Van Thuan and The Spiritual Journey of Cardinal Nguyen Van Thuan

October 22, 2010. The Catholic Church is collecting evidence showing that the Vietnamese Cardinal Francois-Xavier Van Thuan was holy. The former bishop of Saigon was imprisoned for 13 years for religious reasons and was victimized by the communist regime of Ho Chi Minh.

"The Vicar of Rome wanted to take charge of the beatification process because many have been helped by the teachings and example of the Cardinal and his books."

Cardinal Van Thuan was born in April 1928 in the town of Hue, in central Vietnam. In 1975, at the age of 47, he was appointed coadjutor Archbishop of Saigon.

But was never able to fill this position because a few months later he was arrested by the Vietcong.

They accused him of being an infiltrator from a foreign government and an enemy of the communist revolution. He spent 13 years in prison, nine of which were in total isolation.

"While he was in prison, we took refuge in Australia. The first year was very hard for my parents. For many years we heard nothing from him."

Van Thuan was able to celebrate Mass every day because he secretly had a bottle of wine with the label "stomach medicine," and a few crumbs of bread wrapped in newspaper. Each day he took a drop of wine and bread in his hand and celebrated Mass.

He always wore a crucifix that he made in the prison with wires and soap.

On November 2, 1988 he was released. In 1998 he was appointed by John Paul II as President of the Pontifical Council for Justice and Peace and in 2001 he was appointed cardinal. He unfortunately died a few months later, on September 16, 2002.

Road of Hope: The Spiritual Journey of Cardinal Nguyen Van Thuan is an original Salt and Light documentary exploring the life of this political prisoner and prophet of hope. Written and produced by David Naglieri this powerful film traces the history of Thuan from his privileged upbringing in a powerful political family to decades of war, betrayal and imprisonment— when he would celebrate mass in secret with three drops of wine in the palm of his hand and the host smuggled inside a flashlight by his faithful. Featuring interviews with those who knew him best, never before seen family videos, and rare archival footage, Road of Hope offers an unprecedented glimpse into the life of a modern day martyr and saint.
0 comments
Email ThisBlogThis!Share to TwitterShare to FacebookShare to Pinterest

Is intimidating criminals not a good thing? (Not if they're voting for Democrats ILLEGALLY) 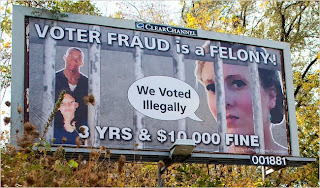 "In response, liberal groups and voting rights advocates are sounding an alarm, claiming that such strategies are scare tactics intended to suppress minority and poor voters. ... In Milwaukee last week, several community groups protested the posting of large billboards throughout the city that show pictures of people behind jail bars under the words “We Voted Illegally.” The protesters said the posters — it was not clear who paid for them — were intended to intimidate people from voting. " from NYT
0 comments
Email ThisBlogThis!Share to TwitterShare to FacebookShare to Pinterest
Newer Posts Older Posts Home
Subscribe to: Posts (Atom)