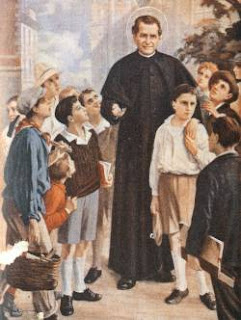 St. John Bosco (1888) may have scandalized others in his efforts to attract and educate boys. Rather than detaching himself from the world and limiting himself to priestly work, he got involved in contract negotiations with the employers of the exploited boys who flocked into the city from the countryside. Rather than wait for them to knock at the Rectory, he went out to find them in the alleys near liquor stores. Rather than keep himself so prim and proper with well starched vestments, he pulled his cossack up as he raced in the town square with the boys.

His attitude of change has been immortalized in the Rules of the Salesians. This has been why his order has thrived and grown to be the third largest in the world today.

To adapt to the needs of times requires the ability to read the “signs of the times“. Being stuck in age old ways is not fidelity; it can be blindness. If one is wearing shades, then everything is seen in that hue. When something fails, it is blamed on everything other than oneself.

I remember meeting two Salesians back in the 80s. The younger talked about the modem setup in the school while the older talked about the book binding shop. It is not good when people get stuck in a rut; because, if all they have is a hammer, then everything else looks like a nail.

To innovate is risky. It is safer to be reactionary, to sit back and wait for the innovator to fail. But as St. Theresa of the Avila wrote, “One who makes no mistakes, makes nothing.” People nowadays are severely criticizing the experiments and abuses brought about by the second Vatican council. But some of these activities were attempts to respond to situations that have never confronted the Church before.  People made it up as they went along.

In the past St. Thomas Aquinas integrated Catholic faith with Aristotelian philosophy and produced the classical Scholasticism that is still taught in the seminaries. But it was radical to use a pagan philosophy to explain the revealed truth in Salvation history.

More recently, there were some who took the Catholic faith and blended it with the Marxist dialectical thought to produce Liberation theology. They thought that since Communism was inevitable, they might as well Christianize it. And that turned out to be tragic mistake. However, I doubt if the liberation theologians were men of prayer because, it is hard to believe how that approach can come from above. And that is the difference between a faithful innovation versus a reckless change.

Prayer makes one honestly accept his ineffectiveness and consider others’ ideas. Prayer brings courage to risk making mistakes and being criticized. Courage comes the cour meaning heart, the symbol of charity. Prayer cultivates one’s love for God and neighbor that makes one reach beyond his comfort zone and find the second wind to start all over.

If the Church is to address the needs of our days, they may need that gift of adaptability given through St. John Bosco.
2 comments
Email ThisBlogThis!Share to TwitterShare to FacebookShare to Pinterest
Newer Posts Older Posts Home
Subscribe to: Posts (Atom)