Understanding the Vow of Chastity. It's a Spiritual Romance. 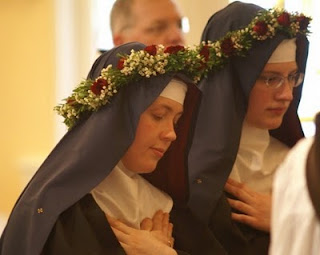 Source  Nuns during their perpetual religious vows details
We're created for the love of God.  Some can do it directly - like these nuns.  Others like myself did not receive that special gift of celibate love.  I do it indirectly through married love.  The first one is like going up on a helicopter;  the latter on the stairway.  The spiritual love is obviously better but it does have it's challenges.  For women, the loss of fecundity is the greatest temptation.  For men, I guess it would be the inability to pass the family jewels into the next generation to somehow perpetuate oneself through a child.  On the other hand, the rewards are awesome.  One can focus on loving God and serving His Church in total freedom.  One can fight fearlessly for the sake of God, justice or human dignity without any worry that one's child or spouse could be punished as a reprisal.  But the biggest plus is that one can love the heavenly Father in the very same way as His only begotten Son.  Celibate love enables one to love with that pure, total and complete self-giving of the Lord Jesus.  So, one can follow, imitate and be united with the Incarnate God in the most intimate way.  ( Who knows dear reader, the Lord might bless you with it - if you ask. )
4 comments
Email ThisBlogThis!Share to TwitterShare to FacebookShare to Pinterest

Video: Our Lady Stopping Abortion (Awesome or creepy depending on where you stand.)

Watch for the testimony about our Lady showing up in the abortuary and causing a worker to quit.  Abortion  is a woman's problem and a woman will bring the Solution.

Video: Pope and Jewish People in Rome during Nazi Regime


Rome, 1943. The city was occupied by the Nazis. The lives of thousands of Jews are in danger. In Vatican City, a neutral state within the borders of Rome, Pope Pius XII is struggling to save the city from starvation and destruction. The lovely Miriam lives with her family in the Jewish ghetto of the city and is courted by two very different young men: lidealista, Mark wealthy student who dreams of glory in combat, and limpetuoso David racketeering black market, which helps its fellow Jews with cunning and deceit. When the Nazis burst into the ghetto there were catches of thousands of Jews, Pius XII, is allied with General Stahel, a staunch Catholic who is not often agree with the policies of the SS headquarters.

Stahel order to end the raids, but can not prevent the deportation of over a thousand Jews, including the father of Miriam, and is then sent to the eastern front. Miriam escapes and is rescued by Mark and David on a daring mission that brings them hiding in the Nazi occupiers. So many other Jews took refuge in churches and monasteries of Rome, Pius XII places that can claim to ownership of the Vatican, and then extraterritorial.  After visiting the site www.alemastronardi.com
0 comments
Email ThisBlogThis!Share to TwitterShare to FacebookShare to Pinterest

Excerpts:
"With the legislature approving several pro-life bills and Brewer signing them, the state is posed to see a reduction in the number of abortions....

Arizona led the nation by becoming the first state in the country to opt out of providing abortion coverage in any insurance exchanges offered under the new federal health care law.

Arizonans now will know the facts about abortion in the state as abortion practitioners will be required by law to report data about abortion, including physical harm to women.

Arizona leads the nation in enacting common-sense, ethical regulations for protecting the dignity of human life that do not interfere with legitimate bio-tech research.

You may thank Governor Brewer  at 800.253.0883 or http://azgovernor.gov/Contact.asp
0 comments
Email ThisBlogThis!Share to TwitterShare to FacebookShare to Pinterest
Newer Posts Older Posts Home
Subscribe to: Posts (Atom)