Hear him out and judge for yourself.  He addresses common objections for abortion better than preachers and politicians.  His logic and reasoning is more impeccable than any philosopher.  His content is as truthful as a Church document but he does not sound "churchy";  he's from the streets.  He is like a black Ronald Reagan in his articulate and effective presentation. He didn't go to Harvard or even finish high school, yet he speaks the truth better than a lot of the elites.  And he doesn't even have a teleprompter.  If video fails, go to http://divine-ripples.blogspot.com/2010/10/video-dropout-more-sensible-and-ethical.html
0 comments
Email ThisBlogThis!Share to TwitterShare to FacebookShare to Pinterest

Democrats think the common citizen is just too dense to understand Obama's achievements. 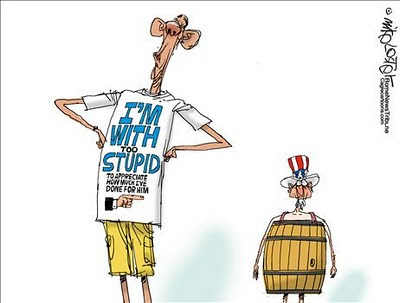 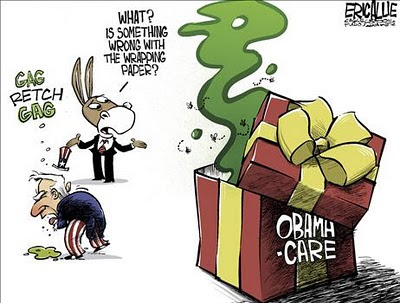 by Eric Allie
The elites think the comman man is just too dense to understand Obama's achievements.  Obama expects us to thank him even.  #@!-* ( Sorry -  keyboard spasm.  Seems to happen a lot these days. )*!~# ( There it goes again.)
0 comments
Email ThisBlogThis!Share to TwitterShare to FacebookShare to Pinterest

Vatican speaks: No communion or funeral Masses for pro-aborts. Liberal bishops e.g. Card. Sean O'Malley who presided on Kennedy's funeral and Abp. Wuerl who has not banned pro-aborts from communion in DC were practically put on notice by Apostolic Asignatura.

If video fails, go to http://divine-ripples.blogspot.com/2010/10/video-vatican-puts-card-omalley-abp.html

2 comments
Email ThisBlogThis!Share to TwitterShare to FacebookShare to Pinterest

Nov. 2 is not just an election. It is an epic struggle between good and evil. A vote for Democrats is an empowerment of the devil. Defend life; vote for someone else.

During the battle over health care reform, President Obama promised the American people that “no federal dollars will be used to fund abortions.” The President and his allies in Congress abandoned that promise and ignored seven out of 10 voters who oppose taxpayer-funded abortion. The result: a new health care law that clearly allows the largest expansion of abortion since Roe v. Wade. These “pro-life” politicians did not honor their commitment to the American people, and incredibly, are still expecting to be elected this November.

Dr. Charmaine Yoest, President and CEO of Americans United for Life Action, announced a new effort this week to hold politicians accountable and clearly demonstrate that life counts. On Saturday, AUL Action rolled out VotingforLife.com, an innovative online grassroots effort that empowers Americans to take a stand.
“Remember,” said Yoest, “you and I promised elected officials that they would be held accountablefor their support of taxpayer-funded abortion in health care reform. Now it’s time to act and take a stand.”
By going to VotingforLife.com, activists can spread the word, get critical early-voting information, tell friends how they can help, share this effort on a blog, get the word out on Facebook and Twitter, and even get a  “Voting for Life” bumper sticker. With just two weeks until the election, time is of the essence. Votingforlife.com—a  one-stop pro-life resource for 2010—is a must-see.
0 comments
Email ThisBlogThis!Share to TwitterShare to FacebookShare to Pinterest
Newer Posts Older Posts Home
Subscribe to: Posts (Atom)