In light of GeicoGate and the recent accusations from the media regarding the violent rhetoric of the conservative movement, Right Wing News took the liberty of editing together the voicemails and emails we've received as a result of DC Douglas' call to contact FreedomWorks. Here's the result.  http://www.youtube.com/watch?v=nSQIYStgBYY&feature=player_embedded


These are Obama's supporters.  So, who's the hater?
0 comments
Email ThisBlogThis!Share to TwitterShare to FacebookShare to Pinterest

During the Tea Party at DC on Tax Day, a lawyer came up to a group and at end of his questioning asserted that the Tea Party is causing violence because of it's protests i.e. "the wackos think that they're doing what we want them to do."    I'll embed the video when I find it.  Yesterday while exchanging thoughts at the Tea Party Facebook page, I noted that, "I hope the sanctity of the electoral process will not be tampered or any way compromised." as a response to the question "Ballots or bullets?".  Immediately, an Obama supporter accused me of threatening the president and threatened to report me.  The same accusations of slander and libel keep getting hurled at these sites from Obama's supporters in an attempt to silence or intimidate the Tea Party.

In 2007, the Supreme Court decided Morse v. Frederick, better-known as the "Bong Hits for Jesus" case. Justice Stevens wrote a dissent and was joined by Justices Souter and Ginsburg. His dissent helps delineate the view of what constitutes controversial, even patriotic, speech and protest from actual incitement of unlawful conduct. This is a relevant portion:


"To the extent the Court defers to the principal's ostensibly reasonable judgment, it abdicates its constitutional responsibility. The beliefs of third parties, reasonable or otherwise, have never dictated which messages amount to proscribable advocacy. Indeed, it would be a strange constitutional doctrine that would allow the prohibition of only the narrowest category of speech advocating unlawful conduct, see Brandenburg [v. Ohio], yet would permit a listener's perceptions to determine which speech deserved constitutional protection.
:
Such a peculiar doctrine is alien to our case law. In Abrams v. United States, this Court affirmed the conviction of a group of Russian "rebels, revolutionists, [and] anarchists," on the ground that the leaflets they distributed were thought to "incite, provoke, and encourage resistance to the United States." Yet Justice Holmes' dissent -- which has emphatically carried the day-never inquired into the reasonableness of the United States' judgment that the leaflets would likely undermine the war effort. The dissent instead ridiculed that judgment: "nobody can suppose that the surreptitious publishing of a silly leaflet by an unknown man, without more, would present any immediate danger that its opinions would hinder the success of the government arms or have any appreciable tendency to do so." In Thomas v. Collins, we overturned the conviction of a union organizer who violated a restraining order forbidding him from exhorting workers. In so doing, we held that the distinction between advocacy and incitement could not depend on how one of those workers might have understood the organizer's speech. That would "pu[t] the speaker in these circumstances wholly at the mercy of the varied understanding of his hearers and consequently of whatever inference may be drawn as to his intent and meaning." In Cox v. Louisiana, we vacated a civil rights leader's conviction for disturbing the peace, even though a Baton Rouge sheriff had "deem[ed]" the leader's "appeal to ... students to sit in at the lunch counters to be 'inflammatory.'" We never asked if the sheriff's in-person, on-the-spot judgment was "reasonable." Even in [Bethel School Dist. No. 403] v. Fraser, we made no inquiry into whether the school administrators reasonably thought the student's speech was obscene or profane; we rather satisfied ourselves that "[t]he pervasive sexual innuendo in Fraser's speech was plainly offensive to both teachers and students -- indeed, to any mature person." See also, Bose Corp. v. Consumers Union of United States, Inc. ("[I]n cases raising First Amendment issues we have repeatedly held that an appellate court has an obligation to make an independent examination of the whole record in order to make sure that the judgment does not constitute a forbidden intrusion on the field of free expression.")
:
The Vietnam War is remembered today as an unpopular war. During its early stages, however, "the dominant opinion" that Justice Harlan mentioned in his Tinker [v. Des Moines Independent Community School Dist.] dissent regarded opposition to the war as unpatriotic, if not treason. That dominant opinion strongly supported the prosecution of several of those who demonstrated in Grant Park during the 1968 Democratic Convention in Chicago, see United States v. Dellinger, and the vilification of vocal opponents of the war like Julian Bond. In 1965, when the Des Moines students wore their armbands, the school district's fear that they might "start an argument or cause a disturbance" was well founded. Given that context, there is special force to the Court's insistence that "our Constitution says we must take that risk; and our history says that it is this sort of hazardous freedom -- this kind of openness -- that is the basis of our national strength and of the independence and vigor of Americans who grow up and live in this relatively permissive, often disputatious, society." As we now know, the then-dominant opinion about the Vietnam War was not etched in stone."


Excerpted from:  http://www.americanthinker.com/2010/04/justice_stevens_on_distinguish.html
0 comments
Email ThisBlogThis!Share to TwitterShare to FacebookShare to Pinterest 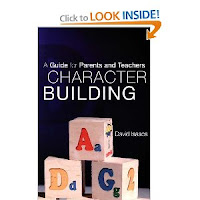 Every night, I give my kids a talk patterned after St. John Bosco's Goodnight Talk.  I take an incident during the day to derive a moral lesson.  The kids, 10,8,7 & 2, get really interested when I use their experiences as a springboard.  Although I was trained as an educator and youth minister, I have some gaps as my focus was on teens.  This was filled recently when I stumbled upon this resource that identifies the age appropriate moral formation.  It is available online at:
http://books.google.com/books?id=YUGFVjzGxEMC&dq=character+building+david+isaacs&printsec=frontcover&source=bn&hl=en&ei=xLLPS8SOBo7s8QS7-e3FDw&sa=X&oi=book_result&ct=result&resnum=4&ved=0CBQQ6AEwAw#v=onepage&q&f=false