St. John Bosco's Prophetic Vision About the Pope and Persecution 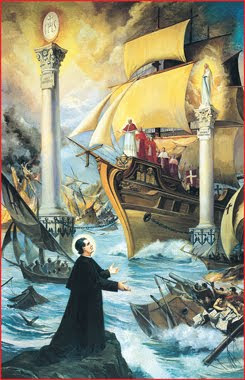 On May 30, 1862 , Don Bosco recounted that in a dream he had seen an immense sea on which a great many ships were arranged for battle against a larger and taller ship. He also saw others which were defending the tall ship. Here are his words:
"In the midst of this endless sea, two solid columns, a short distance apart, soar high into the sky. One is surmounted by a statue of the Immaculate Virgin, at whose feet a large inscriptions reads:" 'Auxilium Christianorum' ('Help of Christians') . The other, far loftier and sturdier, supports a Host of proportionate size, and bears beneath it the inscription: 'Salus credentium' ('Salvation of believers').
"The flagship commander - the Roman Pontiff- standing at the helm, strains every muscle to steer his ship between the two columns, from whose summits hang many anchors and strong hooks linked to chains. The entire enemy fleet closes in to intercept and sink the flagship at all costs. They bombard it with everything they have: books and pamphlets, incendiary bombs, firearms, cannons. The battle rages ever more furious. Beaked prows ram the flagship again and again, but to no avail, as, unscathed and undaunted, it keeps on it course. At times, a formidable ram splinters a gaping hole in its hull, but immediately, a breeze from the two columns instantly seals the gash.
"Meanwhile, enemy cannons blow up; firearms and beaks fall to pieces; ships crack up and sink to the bottom. In blind fury, the enemy takes to hand-to-hand combat, cursing and blaspheming. Suddenly the Pope falls, seriously wounded. He is instantly helped up, but struck a second time, dies. A shout of victory rises from the enemy, and wild rejoicing seeps their ships. But no sooner is the Pope dead than another takes his place. The captains of the auxiliary ships elected him so quickly that the news of the Pope's death coincides with that of his successor's election. The enemy's self-assurance wanes.
"Breaking through all resistance, the new Pope steers his ship safely between the two columns; first, to the one surmounted by the Host, and then the other, topped by the statue of the Virgin. At this point, something unexpected happens. The enemy ships panic and disperse, colliding with and scuttling each other.
"Some auxiliary ships, which had gallantly fought alongside their flagship, are the first to tie up at the two columns. Many others, which had fearfully kept far away from the fight, stand still, cautiously waiting until the wrecked enemy ships vanish under the waves. Then they too head for the two columns, tie up at the swinging hooks and ride safe and tranquil beside their flagship. A great calm now covers the sea. " (Biographical Memoirs of St. John Bosco, Vol. VII. Pages 107-108).
0 comments
Email ThisBlogThis!Share to TwitterShare to FacebookShare to Pinterest

Here's are blogs dedicated to this subject:  http://freedomdefense.typepad.com/leave-islam/

Excerpts:  "This is America, Land of the Free.  Home of the Apostates from Islam.
Freedom of religion. That is the American way. You can leave Islam. We can help. We fight the Sharia law.

All over the world, apostates from Islam are harassed, beaten, threatened with death, and killed outright. From Egypt to Iran, from Somalia to Indonesia, people who make the decision in conscience to leave Islam are denied their basic human rights while the world looks on with indifference.  It's a matter of Islamic law. Muhammad, the prophet of Islam, called for apostates to be killed. All the schools of Islamic jurisprudence teach the same thing. The Muslim countries that implement Sharia fully today enforce hat death penalty, and in other Muslim countries individual Muslims are often all too willing to take the law into their own hands and kill apostates if the governing authorities will not do the job.  But America is different. America is the Land of the Free. In America, we respect the individual conscience. Now Islamic supremacists are trying to enforce Islamic law here. Apostates in America have gathered together only in the presence of armed guards. High-profile apostates have been threatened with death. One Islamic scholar who didn't even leave Islam but began to teach principles that Muslims consider heretical was murdered in Arizona. We are determined not to allow the Sharia death penalty for apostasy to spread to American soil. We are determined to protect the free conscience and the free soul. If you choose to leave Islam, we will do everything within our power to help you find safety and refuge from those who would threaten you and harm you.  Call us."

"If you are in the U.S. and are being harassed or threatened for leaving Islam, you have recourse. Contact the local police. Contact us at writeatlas@aol.com and director@jihadwatch.org if they don't understand or dismiss your plight. We will call public attention to your case, which will make it more difficult for you to be harmed."

Video about sex: Pause before you play.


Sex has consequences - like babies.  And people do not kill their young.  With babies, come bills.  They say, love goes out the window when the bills come through the door.  I guess they mean, the warm romantic fuzzies disappear when one runs smack into the day to day tasks of caring for a child.  So, there are other ways to express love.  And waiting is one of them.

Also, no one likes used shoes.  You know that argument about trying out shoes before you buy them.  Sexual intimacy is not trivial.  Enough said.  Check out Bristol's Candies Foundation http://candiesfoundation.org/
0 comments
Email ThisBlogThis!Share to TwitterShare to FacebookShare to Pinterest

http://www.youtube.com/watch?v=iuLjAOgQqOA&feature=player_embedded#
David Saucedo is POLATIK, a 26 year old Texan who has gone from convict to community leader in three short years. An inspiring American story, David's troubled childhood and prison sentence have taught him the hard life lessons that today make him a respected husband, father, teacher, mentor and rapper.

In David's own words: "I have pledged to God and I pledge to you, that I will dedicate my life, my fortunes and my sacred honor to supporting citizen led solutions, founded on community responsibility."
RightNetwork launches on TV, Web and Mobile in the summer of 2010.  Find more at http://rightnetwork.com/

Video: Testimony of how an unborn child reached for her mom's hand in ultrasound