Panthers, Klan and Patriots to party at Mall this Summer?

The New Black Panther Party  (If video fails, go to http://divine-ripples.blogspot.com/2010/07/panthers-klansmen-and-patriots-to-party.html )  ( BTW, has anyone seen a panther that is not black? )


The New Black Panther Party plans to attend a Tea Party Event at the Mall this August.  In a video,  their leader puts themselves at the same level as the Tea Party.  That's apples and oranges.  Anyone who's been at a Tea Party knows that we're nothing like the Panthers.  Just look at us below. 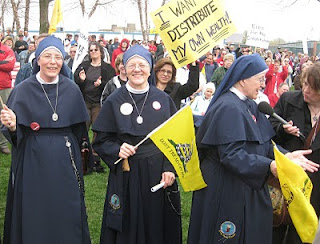 The Tea Party Patriots
If I were to find a group that matches the panthers' attitudes and methods, then White Supremacist groups & the KKK come to mind. I wonder if these guys plan to be there as well. 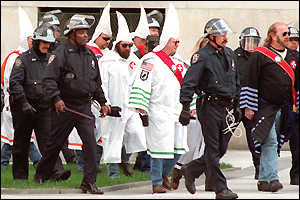 The Klan
2 comments
Email ThisBlogThis!Share to TwitterShare to FacebookShare to Pinterest

I doubt if the newly appointed auxialiary bishop of San Fran will deny Holy Communion from  Nancy Pelosi  anytime soon.  From his earlier commetns, this Harvard & Stanford grad deems it more damaging to impose its discipline on pro-abort politicians than just to let it go.  The perception that the church is using it as a weapon and being a tool of the GOP will make others question the objectiveness and truthfulness of her proclamation.  IMHO - if the Church censors herself by word or action, then she already ceases to be an objective voice of truth.  She may not appear to be a tool of the GOP but she unwitting became a supporter of  the Democrats because silence is consent.  In making pastoral decisions, I think the worldly considerations should take a back seat to the proclamation of God's Word - in and out of season, be it popular or not.  And if discipline is required as Pope Benedict directed, the bishop must come out swinging his staff to keep the wolves from tearing apart the flock.  Abp. McElroy must not have read that directive yet or think himself to know better.  I may be wrong and I certain hope I am.

SAN FRANCISCO, July 6, 2010 (LifeSiteNews.com) - The newly-appointed auxiliary bishop of San Francisco has in the past criticized Catholic Church policy disallowing politicians who promote abortion from receiving Holy Communion, saying that such a move makes the Church appear too "partisan," "Republican" and "coercive."


In his column, McElroy began by noting that "the theological starting point for those who advocate eucharistic sanctions is a sound one," inasmuch as the support of Catholic leaders for "abortion rights" represents a scandal and "a major failure in church life."...  Citing the Church's traditionally prudential handling of scandal, the monsignor claimed that the benefits of denying Communion are "heavily outweighed" by other considerations, such as that the move would be "perceived by Americans ... as coercive" and make abortion appear to be a "sectarian Catholic issue."  "The imposition of eucharistic sanctions solely on candidates who support abortion legislation will inevitably transform the church in the United States, in the minds of many, into a partisan, Republican-oriented institution," he wrote.

"It does not matter that eucharistic sanctions would be fully within the legitimate moral and civil rights of the church to adopt, and that those who have attacked them as a violation of the separation of church and state are totally in error in their understanding of the constitutional tradition of the United States," wrote McElroy. "What does matter enormously is that Americans will in general recoil from the use of the Eucharist as a political weapon, and will reassess their overall opinion of the church’s role in the political order."