Spreading the wealth in the name of Christ: 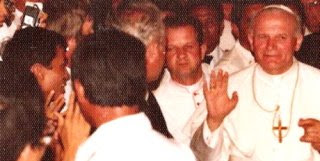 During my practical training, I was assigned in an island of sugar cane plantations where the land owners traveled every year while the workers lived in something like a large dog house. Back then, some priests applied Liberation theology – an unholy union of Marxist’s dialectical materialism & Roman Catholic theology. They organized the workers & were out to dismantle unjust social structures. They read the newspaper in place of the Gospel because it was the sign of the times. Whenever there were a concelebration where different religious orders participated, our priests were the only one’s wearing vestments. After the ceremony, then would pique our curiosity with comments like, “Poor father, he seems not to know what is going on in the mountains during the night.” But we do know. Lay leaders are picked up by the military and end up buried in a field. But we chose to stay the course of evangelization, catechesis, sacramentilization & education. A few priests & seminarians became so enamoured with helping the poor that they took up arms just like the book of the Judges and the movie “Romero” and “”. The late Pope John Paul II had a special meeting with the religious working in this island. There he charted the direction of the Church along the long established social teachings.

I think that liberation theologians could have come up with a better way to help the indigent without piggy-backing on an atheistic ideology if they read the God's Word instead of the newpaper, celebrated Mass with reverence, adored the Blessed Sacrament & respected their bishops.  Afterall,. killing off one's rich siblings to distribute their wealth is still forbidden by God. (Cfr the 5th & 7th from the. Decalogue.)