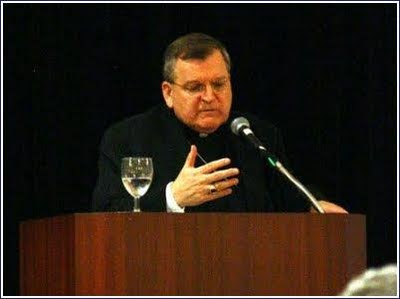 Those who wanted to make the late senator Ted Kennedy the poster child for Catholics who support choice or abortion rights have been waiving a letter from the Pope that referenced well wishes and a blessing.  They seem to suggest that the Pope's words indicated that Kennedy was going to "sail into a happy place" as stated by President Obama.  My opinion is that it is a typical form letter sent as a polite response.

To remove any doubt of where the Church officially stood or what the Pope meant, the prefect of the Supreme Tribunal of the Apostolic Signatura, Archbishop Raymond L. Burke, came to Washington, D.C. last Friday and referenced this matter.  "Neither Holy Communion nor funeral rites should be administered to such politicians," said Archbishop Burke. "To deny these is not a judgment of the soul, but a recognition of the scandal and its effects."

He firmly held that when a politician is associated "with greatly sinful acts about fundamental questions like abortion and marriage, his repentance must also be public." He added, "Anyone who grasps the gravity of what he has done will understand the need to make it public."


So, it is more likely that Kennedy is condemned to an eternity in hell.


Contrary to the suggestion of Cardinal O'Malley, it's not uncharitable to point out the scandal caused by these Catholic politicians.  "The Church's unity is founded on speaking the truth in love. This does not destroy unity but helps to repair a breach in the life of the Church."

Ed McGlasson shares how he helped his daughter transition from childhood to womanhood during adolescence.

Former NFL lineman Ed McGlasson shares how he helped his daughter become a woman and taught her the virtue of chastity and preserving herself for marriage.

Click here to go to source or type http://www.youtube.com/watch?v=DYUFWonnhz4
0 comments
Email ThisBlogThis!Share to TwitterShare to FacebookShare to Pinterest

Thoughts about common ground on abortion

On common ground about abortion

Short version, there is none.  Expanded version, the pro-abortionists want to have the license to kill unborn children.  Some of them from Chicago even allow the murder of fully born infants.  Pro-lifers hold that a human person is formed at conception.  Hence between life and death, there is really no middle or common ground.  Pro-aborts will then go for the split the difference argument i.e. to be able to abort in the first trimester but not afterwards.  They just don't get that a person, no matter how young, is still a person with the inalienable right to live.