Muslims behead Christian convert in Afghanistan on 6/28/11. I protest by burning a page of their religious text.

For source and more details, click here or go to http://catholic.org/international/international_story.php?id=41900

A grisly video released to international media by two separate Afghan sources depicts four Afghan militants beheading a man believed to be a Christian in Herat Province. The video is intended to warn Afghanistan's tiny Christian population of the dire consequences if American forces leave Afghanistan. President Barack Obama announced his intentions to begin a gradual withdrawal of U.S. troops earlier this week.


My response:  Burning 1 page from a Muslim text they hold sacred for that 1 life in solidarity with the victim and his family and in protest for the immorality of Islam.  (filed under: burn-a-qurn, Islam, solidarity) 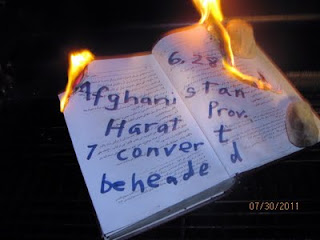 The Goretti Group - Experience the Joy of Purity! (video)

If video fails, click here or go to http://divine-ripples.blogspot.com/2011/06/goretti-group-experience-joy-of-purity.html