NY Muslim cleric backs out and even denies deal to move trophy mosque away.

It looks like the NY imam is backing out of the deal and even denying it altogether.  If I were to choose who is lying between this Muslim cleric and Rev. Terry Jones, I will say that the Muslim is more likely to lie because it is their practice - taqiyya.  This just emphasizes the fact that Muslims cannot be trusted and have no integrity.  Nonetheless, a Baptist church in Topeka, Kansas will also hold a Q'uran burning day on 9/11.

Are Muslims permitted to lie?  http://www.thereligionofpeace.com/Quran/011-taqiyya.htm
Summary Answer:
Muslim scholars teach that Muslims should generally be truthful to each other, unless the purpose of lying is to "smooth over differences."
There are two forms of lying to non-believers that are permitted under certain circumstances, taqiyya and kitman. These circumstances are typically those that advance the cause Islam - in some cases by gaining the trust of non-believers in order to draw out their vulnerability and defeat them.
More at http://www.thereligionofpeace.com/Quran/011-taqiyya.htm
2 comments
Email ThisBlogThis!Share to TwitterShare to FacebookShare to Pinterest

No more Ground Zero mosque; Q'uran burning will not continue. 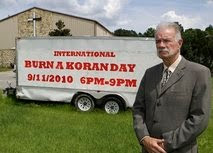 The imam who wanted to build a mosque at ground 0 has backed down and will move it elsewhere.  Because of this, Rev. Terry Jones has decided to not continue with his plans to burn the Q'uran.

The Rev. Terry Jones has been called a complete ass for what he had planned to do.  However, in the words of St. Jean-Marie Vianney, "If Samson can slew hundreds of Philistines using the jawbone of an ass, imagine what God can do with a complete ass."

God might have used this obscure and ridiculed pastor to stop one of the greatest affronts on the pitiful victims of 9-11.  When the Obama administration disregarded their sensibilities and supported the building of the mosque to commemorate the triumph of Islam on America, the people had nowhere else to turn but God.  And God heard the cries of the poor and raised this simple person with an idea that the world scorned as fanatical.  And yet, it has been the answer to the prayers of stopping the abomination that would have added insult to the injury of 9/11 - time after time.  So, they need to be taken to task for this because, where there's a will, there's a way.

Back in the 70s, the entire 42nd St. is filled with pornographic shops.  Now, following Obama's academic defense, those shops have the right to be there.  But it is not right even if they had the right.  So, the local politicians did something.  They made laws that peared down the number of these smut shops until it is practically gone today.  Obama could have done the same thing with the mosque that he himself admits may not be the right thing to do.  But, he's just talk, copping out to cover himself.  In reality, everyone knows that he does not care for the victims of 9/11.  Many suspect that he is on the side of the terrorists because, he himself has not spoken with great love for the USA.

The news try to blame themselves now for the attention that this event got.  It back fired on them.  They wanted to paint those who oppose Islam as nuts but touched off a raw nerve that showed that the protestors are not just 30 people in the boonies.  I just did a search in Google on "burning koran quran" & got nearly 10 million hits (9,820,000).  When I searched on "ground zero mosque", I got nearly 15 million hits (14,500,000).  This is so because burning the Q'uran is one of the few things that Americans still have to protest the desecration of Ground Zero by a mosque of triumph and the fields of blood in PA by a cresent.

Anyone with goodwill can understand how those are offensive; I think some Muslims even agree. The late Pope John Paul II respected feelings like these when he backed off from building a convent at Auswitch just because some Jewish people found it offensive. It may be offensive only in their minds and the Church may have the legal right to do it, but the late Pope, a decent and holy man, respected these and backed down.
2 comments
Email ThisBlogThis!Share to TwitterShare to FacebookShare to Pinterest

BO says "GOP has no new or better ideas for the economy." unlike himself. 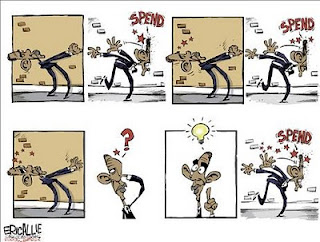 by Eric Allie
I think there should be a requirement for politicians to have continuing education just like other professionals.  Otherwise,.... you get the picture.
0 comments
Email ThisBlogThis!Share to TwitterShare to FacebookShare to Pinterest

A couple of pro-choice Republicans came out unabashedly from  the woodworks of NH.  Between them and a pro-life Democrat, I'd go with the pro-lifer.  Better the devil you know.  The Repub has already shown his face as a baby killer.  The pro-life Democrat may still be real. Besides life trumps bread anytime.

The Church opposes burning the Koran on 9/11 because it offends Muslims.  How about burning a pornographic magazine, the black book of Satanic incantations or instructions on how to make a dirty bomb?  I'm sure that will be alright anytime because those cause sin and evil.  So, anything that causes evil is OK to destroy.  But what if it offends the evil doers?  And what if the evil doers hurt us?  Perhaps we should just give in and become Muslims, Satanists, sex addicts and bomb makers.

Why does Eric Holder not let dead people get purged from the voter lists?  Will dead men walk this November and vote for the Democrats?    More at  http://www.powerlineblog.com/archives/2010/09/027178.php
If not that, how else can they cheat?  Read at http://www.ejfi.org/Voting/Voting-100.htm

People say we should turn the other cheek on 9/11. We have. "Turning the other cheek" is the counter teaching against "an eye for an eye". That's the context. Christians do not seek revenge. They killed 3,000 civilians; we haven't gone after 3,000 civilians or crashed a plane in a Saudi commercial building. We have moved on. But some politicians want to interpret our Scriptures for us and say we should be doormats. To them I say, "After you."
0 comments
Email ThisBlogThis!Share to TwitterShare to FacebookShare to Pinterest
Newer Posts Older Posts Home
Subscribe to: Posts (Atom)