Loitering in the restrooms of the interior castle 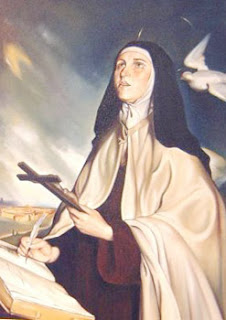 St. Therese of Avila is one of the doctors of the Catholic Church because of her teachings about the mystical life. In her classic, Interior Castle, describes spiritual growth as moving from mansion to mansion to eventually reach the courts of the God.

Each mansion signifies a situation:
1st: In the state of grace but surrounded by sin. Starting a program to grow in perfection.
2nd: Embarking in religious practices e.g. prayer to advance.
3rd: Living an exemplary life of love governed by reason (so none of that sentimental or lustful desire).
4th: Starting to surrender personal plans and programs to God’s activities
5th: Something like a betrothal where there is “incipient” union in which the soul prepares itself to receive gifts from God.
6th: Something like being “lovers” where the soul is torn between enjoying favors from God and afflictions from outside.
7th: A clarity in prayer culminating in a spiritual marriage with God.

I got lost in the fifth room and will probably lollygag around the restrooms there if I do not do more with my prayer life. Since I am living in the real world of politics, taxes, groceries and timesheets, I doubt if I really can have that serious of a prayer life with the incipient union – whatever that is. I seriously doubt if that is demanded from my state of life. Nonetheless, this is still everyman’s pilgrimage – whether one strides quickly or moseys along. The very language of the upper mansions is so romantic, syrupy and sweet that it is hard to relate to but is something to look forward to. I guess experience will make things intuitive. Lord knows how ineffable these realities are so, St. Therese must have had a heck of time trying to come up with a narrative or description.

One can always read the source and commentaries. I guess it’s a start – like reading about the warmth and light produced by fire. But it is best to actually see and touch the fire at the same time.

Bottom line, there’s a great frontier to explore out there - space for spiritual growth. St. Theresa provides a map or method of going through this morass of the unknown. And it is by prayer.

One enters the first mansion by mental prayer or meditation where one withdraws from without and concentrates on the devout observance of the passion of Christ and penitence.

The second level is the “prayer of quiet” where the human “will” is lost in that of God by virtue of a charismatic, supernatural state given of God, while the other faculties, such as memory, reason, and imagination, are still susceptible to distraction. Despite the interruptions, there is more stillness than the first mansion.

The third level is called "devotion of union" and consists of being is ecstasy. That’s different from taking that street drug because the high comes from the Most High. Reason is absorbed in God even if the memory and imagination wanders around a bit. The intellect and will kind of rests peacefully and blissfully in a conscious rapture of the love of God. I guess it is like being in a trance having your heart and breathing stop – well almost as you behold something so awesome that you just get caught in the moment and your jaw drops while drooling uncontrollably. (St. Therese didn’t put it that way but I don’t get her flowery language much.)

I have to cut and paste the fourth levels and beyond just because. If you get it, I salute you. Here goes. “The fourth is the "devotion of ecstasy or rapture," a passive state, in which the consciousness of being in the body disappears. Sense activity ceases; memory and imagination are also absorbed in God or intoxicated. Body and spirit are in the throes of a sweet, happy pain, alternating between a fearful fiery glow, a complete impotence and unconsciousness, and a spell of strangulation, intermitted sometimes by such an ecstatic flight that the body is literally lifted into space. This after half an hour is followed by a reactionary relaxation of a few hours in a swoon-like weakness, attended by a negation of all the faculties in the union with God. From this the subject awakens in tears; it is the climax of mystical experience, productive of the trance. (Indeed, she was said to have been observed levitating during Mass on more than one occasion.)”

There it is and it is what it is. Once you or I get there, then it will make sense. For now, we’ll clumsily make our way through the castle. When things start getting weird - in nice way then it will be time to get a spiritual director for coaching. Sometimes the devil gets in the act to mess with our heads. It’s worth the journey and the journey is just as fun.  Or we may choose to loiter around the restrooms of the interior castle and get nowhere until time is over.